Tour of Flanders: The Toughest Bike Race In The World

Sometimes an event transcends the merely athletic and becomes the beating heart of a culture. In Northern Belgium that event is the Tour of Flanders.

Known in Flemish as De Ronde van Vlaanderen, or simply de Ronde, it’s a date in the calendar that brings the pedal-passionate people of Belgium’s northern Flemish-speaking region together. It is a sort of Volksfest of shared enthusiasm; perhaps like the Hahnenkamm weekend in Austria but with the enthusiasm multiplied five-fold. 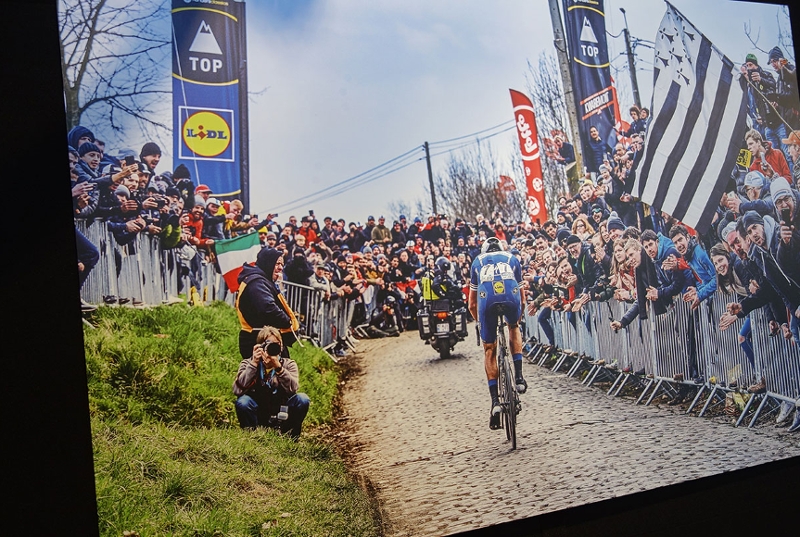 “It’s one of the biggest cycling events on the World Tour,” explains Geet Joris, the director of a museum dedicated to de Ronde. The museum is housed in a jarringly bunker-like concrete building in Oudenaarde, the otherwise picturesque city that hosts the race’s finishing line. 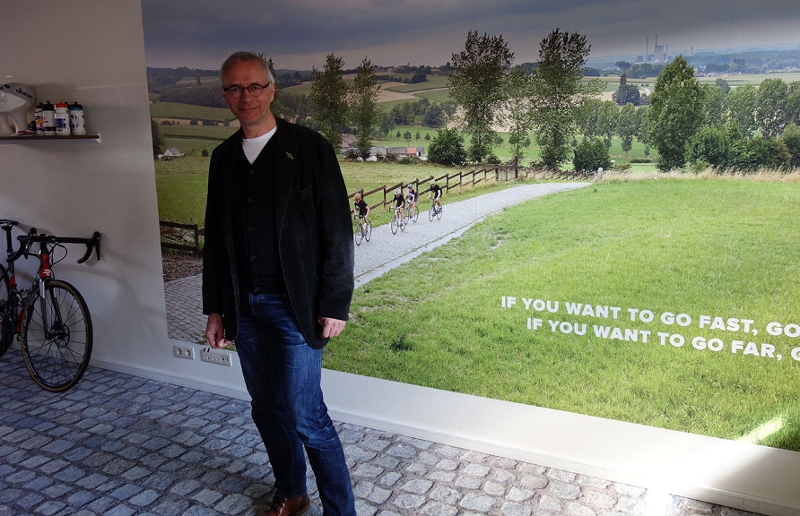 Geet Joris at the Tour of Flanders Museum

This year, with blue skies and the fruit trees in blossom, an estimated million fans lined the twisting, undulating roads of Flanders, a province with a population of just 6 million, to see the race live. The crowds clustered by the iconic cobbled climbs such as the Muur, or the Koppenberg or the Oude Kwaremont, thronging five lines deep on the tight corners. Millions more were watching at home. 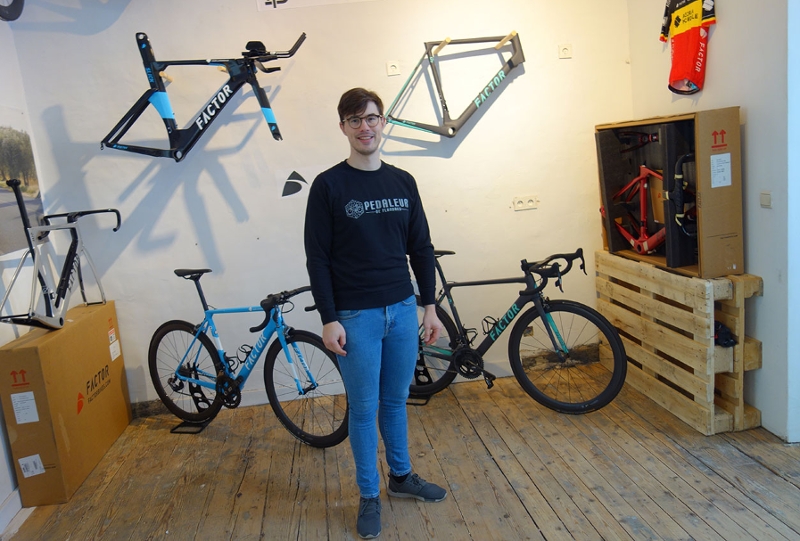 It’s not coffee but rather the strong local Kwaremont beer, named after the iconic cobbled climb, that is flowing when I meet race organizer Tomas Van der Spiegel. He is standing outside the white-walled Café D’Oude Hoeve, a cyclists’ watering hole on the Ronde van Vlaanderenstraat, absorbing the atmosphere.

On this road, named after the race, the names of the winners of the previous 102 Rondes have been written into the tarmac and giant photos of race legends such as Eddy Merckx and Fiorenzo Magni line the roadside. There’s a chill in the air and the riders won’t arrive for a few hours but the party is in full flow. The passion for the sport is infectious.

“I think it’s in our DNA” says Van der Spiegel. “Many of us are or were active cyclists and we grew up with cycling. It’s just who we are and I hope it stays that way. At this time of year, people are just waiting for race day like you might wait for Christmas.” 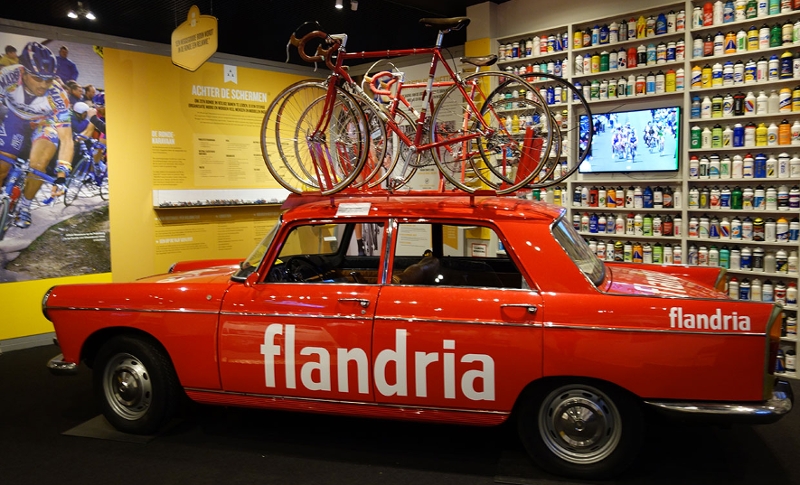 In his excellent book The Ronde, author Edward Pickering describes how the race rises above comparisons with cup finals or tennis tournaments. “The Tour of Flanders has more in common with Carnival or with the matsuri of Japan – festivals that combines various elements of Shinto, fertility rites, booze, taiko, drumming, occasional violence and local pride."

What I’ve always loved about the sport is that though in essence a cycling race is seductively simple; the rider who pedals fastest will win, each race is defined and characterized by the geography, landscape and weather conditions of the host region; and to win you have to study and understand these things.

„What we have is this totally unstructured network of small roads that are interconnected with cobbles and the ‘bergs’ (hills) as we call them,“ says Tomas Van der Spiegel, „and it is just very particular to this area and very special.“

The roads are narrow and often made of slabs of concrete – betonwege - in varying states of repair. Certainly, when you are riding here you are always busy on the bike, never just mindlessly pedaling but always thinking and reacting.

Trixie Worrack from Germany, a veteran of the women’s peloton, describes the experience of racing here in a mix of awe and trepidation: “It’s such a different race. It’s left then right then left then right and so you have to concentrate all day. You can be at the front of the peloton and then make one mistake and you are right at the back. It’s a different sort of racing than anywhere else in the world.” 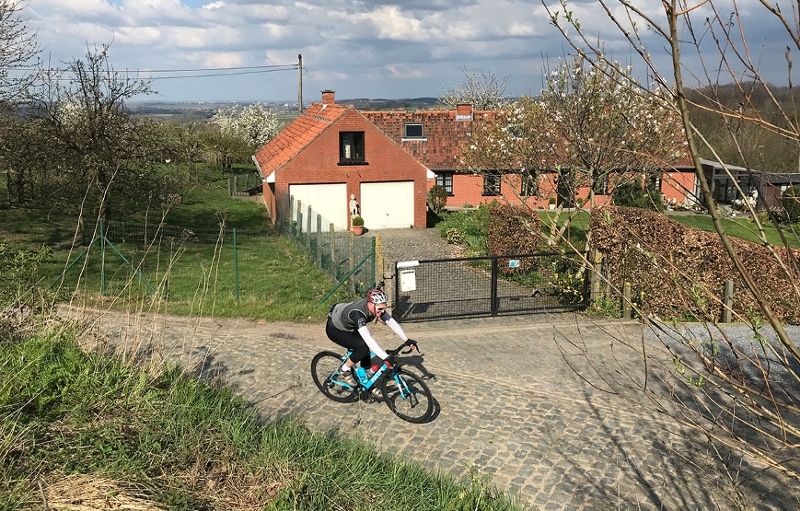 This individuality has been promoted ever since the first race in 1913 when cycling helped give the people of Flanders the feeling that they were respected despite the economic and political dominance of the French-speaking Wallonian Belgians at the time.

A Symbol of Pride

Flemish riders such as Cyrille Van Hauwaert, simple but tough farm boys, had started winning races abroad and that meant a lot to a population that had felt disregarded. The race’s first great promoter Karel Van Wijendendaele, a journalist, was a supporter of Flemish independence.

There is an uncontroversial one; a red-clawed lion symbolizing Flanders place within the nation-state of Belgium and the black-clawed lion used by the Flemish independence movement. “We prefer not to see the black-clawed flag around here", says museum director Geet Joris, “the race should not be about politics. It is a festival. It is fun.”

Riding With A Rock Star

Naturally as a man of action, I didn’t just want to watch the racing. I want to ride these iconic roads. Two days before the race, Dieter from Pedaleur de Flandres lends me a bike and we go for a spin with Dries Verclyte, a former rock singer who now runs Cycling in Flanders.

Dries, whose band Rebelines were named after the cycling star Davide Rebellin, knows the roads like the back of his hand and he takes us on a 100km route around Oudenaarde that takes in all the famous climbs.

The Poetry of the Cobbles

My first experience comes on the mostly flat Haaghoek, a few kilometres out of the town of Oudenaarde, which shakes me like a maraca until, on the brief descent, I fear I am losing the feeling in my arms. It’s really tough but also exhilarating. As the writer Robin Magowan writes in his book Kings of the Road: “To the Flemish imagination, cobbles are to a surfaced road what poetry is to prose.” Ed Pickering describes them as de Ronde its “rhythm, rhyme and metre”

A few kilometres later, comes the Molenberg, a 90-degree bend of to a narrow stretch of cobble stones that rise steeply up past an old water-mill and over a mossy bridge. It’s short and not more than 14 per cent gradient, but as I struggle to push my back wheel over the bumpy surface, I start to wonder if I’ll make it up the hill.

“On cobbled climbs it is all about keeping the traction,” Dries tells me. “And when it gets really tight and uphill you must also keep the balance. Too far in the back and your front wheel will come up, if you are too far in the front you will lose traction in the back.”

„We have big heroes“

Thankfully Dries is merciful. Before we tackle the brutal cobbled Muur climb out of the town of Geraadsbergen, he takes us for a break in Bar Gidon which is owned by the former racer Frederic Penne. Inside vintage jerseys hang from the rafters and start numbers are pinned to the bar.

“Of course, we have big heroes and we have people who do well in cycling which also brings out the passion,” says Dries. “When you have local heroes, who excel in a sport it creates this whole atmosphere that everyone likes cycling.”

At Bar Gidon they serve a delicious local specialty called mattentaart, a sort of curd cake flavoured with almonds. It propels me over the climb and up the Oude Kwaremont, the Paterberg and even the mossy Koppenberg where even Eddy Merckx had to push during a 1970s race. 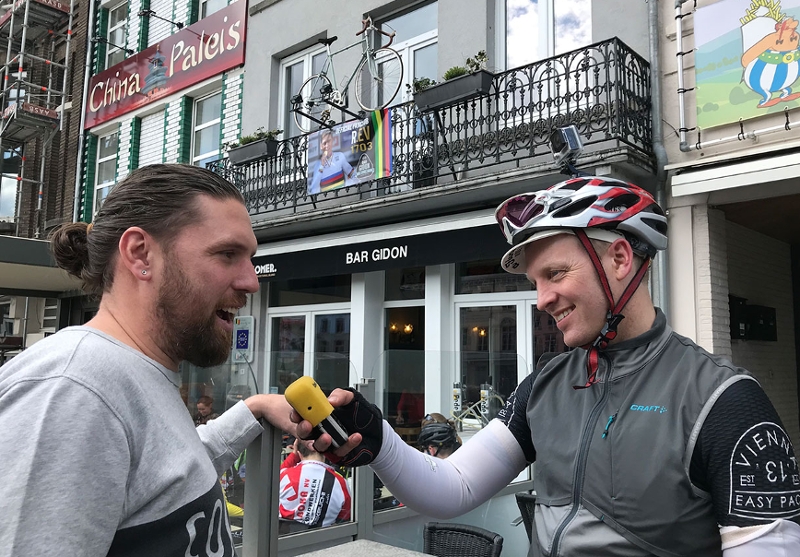 Leg-tired but satisfied, I retire to an Oudenaarde pub, a stone-walled former malt-house, to meet up with one of the greatest legends of the Ronde, Johan Museeuw.

Nicknamed the Lion of Flanders, he won de Ronde a joint-record three times and was on the podium 5 times more, riding the brutal course for 17 consecutive years until his retirement in 2004. He also won a World Championship.

„It takes brains to win“

Now in his 50s he has a hulking muscular look and a firm handshake that is strangely contradicted by a soft, gentle voice.

“To win, you need a big engine, you need volume, otherwise you are not a classics rider and you have to ride very well on the cobble stones. But you also need to be intelligent and not use your energy too early. It takes brains to win.” 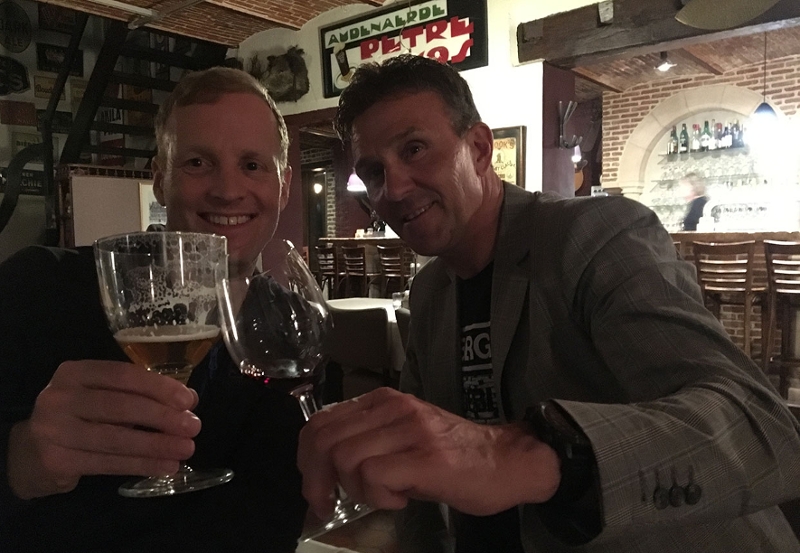 Johan Museeuw and, erm, another cyclist

Museeuw is still out riding on the roads of Flanders most days and in all weather conditions. On the day we meet over a beer he has done a 140km loop in the morning followed by a 100km+ afternoon ride to test a new bike. When we’d called to set up the interview, he pulled out his phone while still riding up the ferocious cobbled climb up the Oude Kwaremont.

“We have spectacular views, we have hills we have cobble stones, we have beautiful roads so we have everything here in Flanders,” he tells me. “That’s why I still bike a lot.” 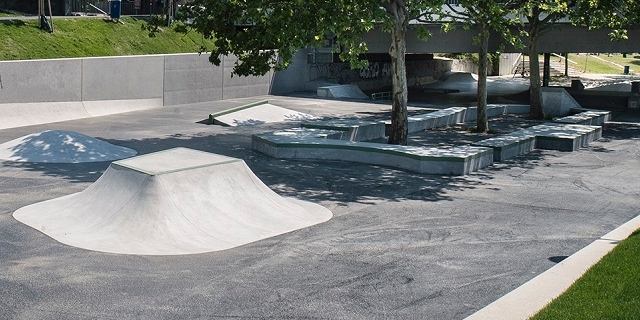 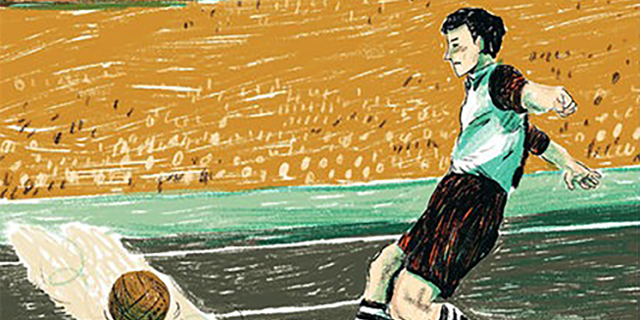 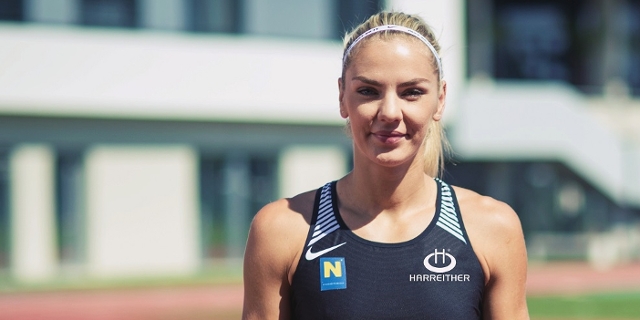 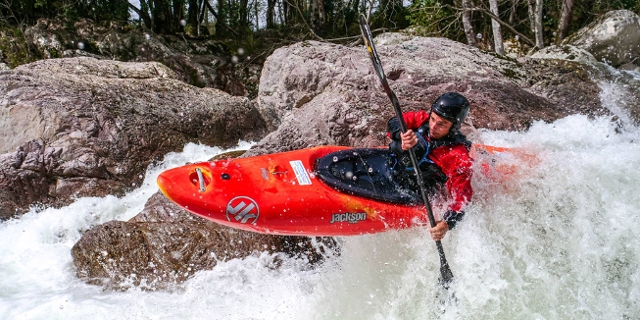 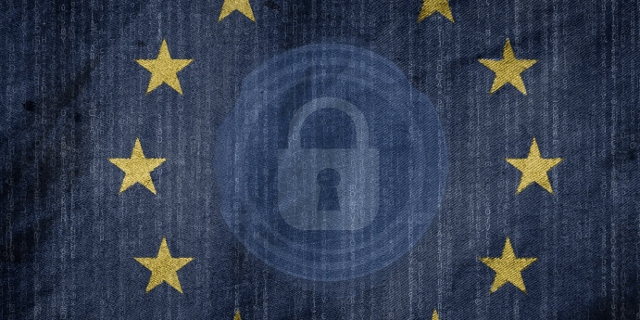 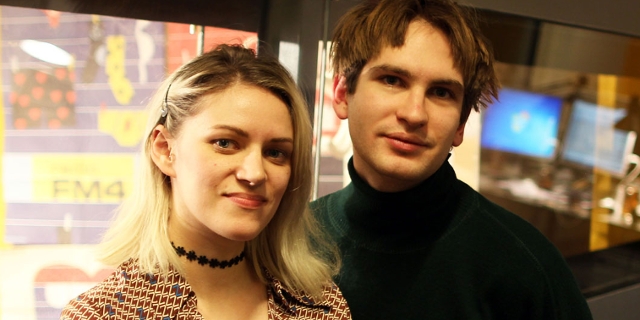 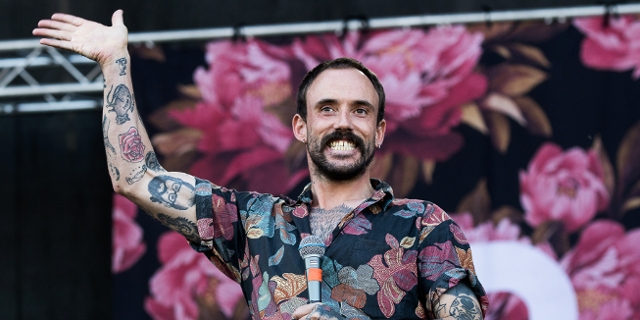 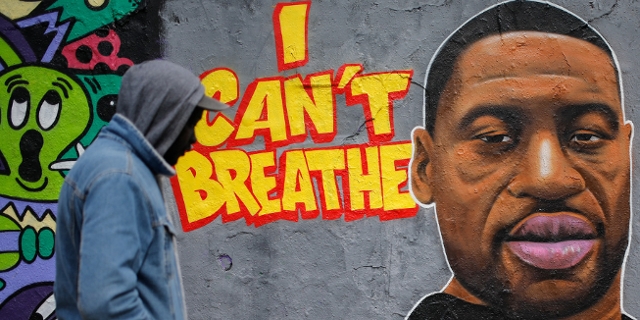 On the Murder of George Floyd, Horror Stories and The American Folk Tale