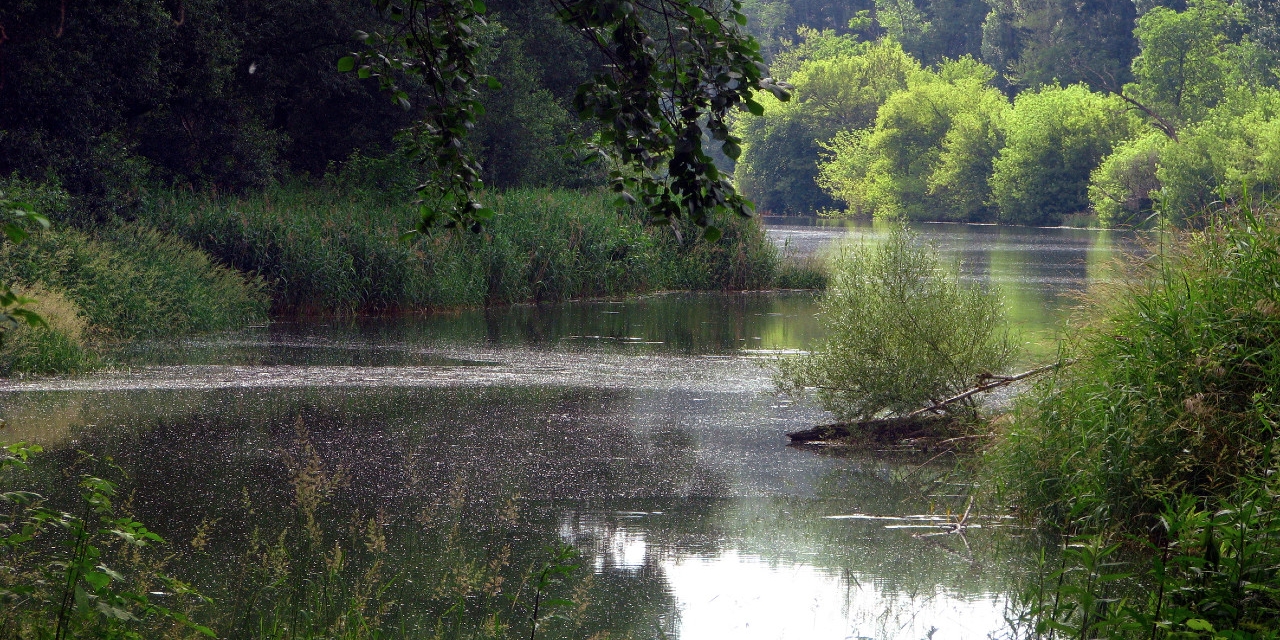 The Amazon of Austria

The Donau-Auen National Park is a reminder death gives life. And that the maligned Boomer generation launched the modern environmental movement here.

My feet squelched deliciously in the soft mud as we lift our narrow wooden canoe over a dam recently built in this slow-moving side channel of the Danube. Ahead the water was speckled green with lily-pads, strewn with glistening white dead wood and overhung by dense trees. The air was alive with bird-song and the chirrups of insects.

As the canoe moved gently over the shallow water, I looked down to see a subaqueous forest of river plants, slivering fish – a carp, a pike – and even a water snake. In this “stay-at-home” summer it was easy to let my imagination run wild, and fantasize that I had jetted to some far-off jungle hide-away, an Amazonian adventure, perhaps.

But the truth is I got here relatively quickly and relatively carbon-neutrally. I’d pedalled here by bike, setting off at dawn from Vienna, for an Austrian biodiversity adventure here in the Donau-Auen National Park.

The stretch of the 93 square kilometre park that I was exploring was the Stopfenreuther Au near the Lower Austrian town of Hainburg. The name might ring bells. In the early 1980s there were plans, fully backed by the government, to build a hydro-electric power plant that would have destroyed these alluvial forests. In December 1984, a mass sit-in of protesters, led by the WWF, braved sub-zero temperatures and police intimidation at Stopfenreuther Au and managed to get the authorities to back down. 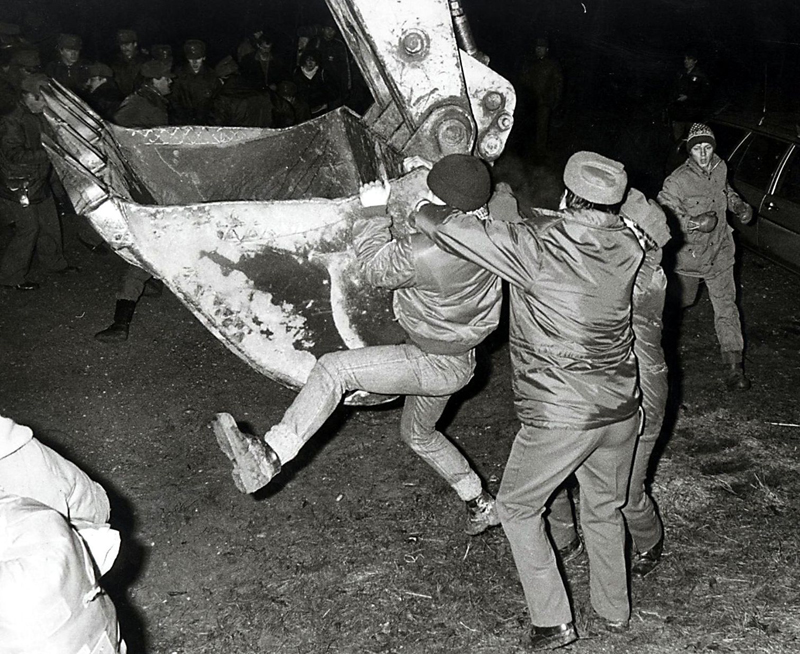 This victory, against all odds, was a turning point in Austrian politics. People were galvanized by the power of peaceful civil disobedience and by the shared concern for nature that crossed social barriers:

“There were students there, there were workers there, people from all parts of society,” remembers Ursula Grabner, who now works at the national park which was founded in 1996 as a direct consequence of that show of people power. Looking back at the pictures it seemed a vibrant and colourful moment of awakening for Austria and for me the history lesson provided plenty of surprises. I’ve experienced the ÖVP’s Othmar Karas as a rather dour if competent and principled MEP. I was surprised to read that, as part of the youth-wing of his party, he’d turned up at the protests dressed as a cormorant. 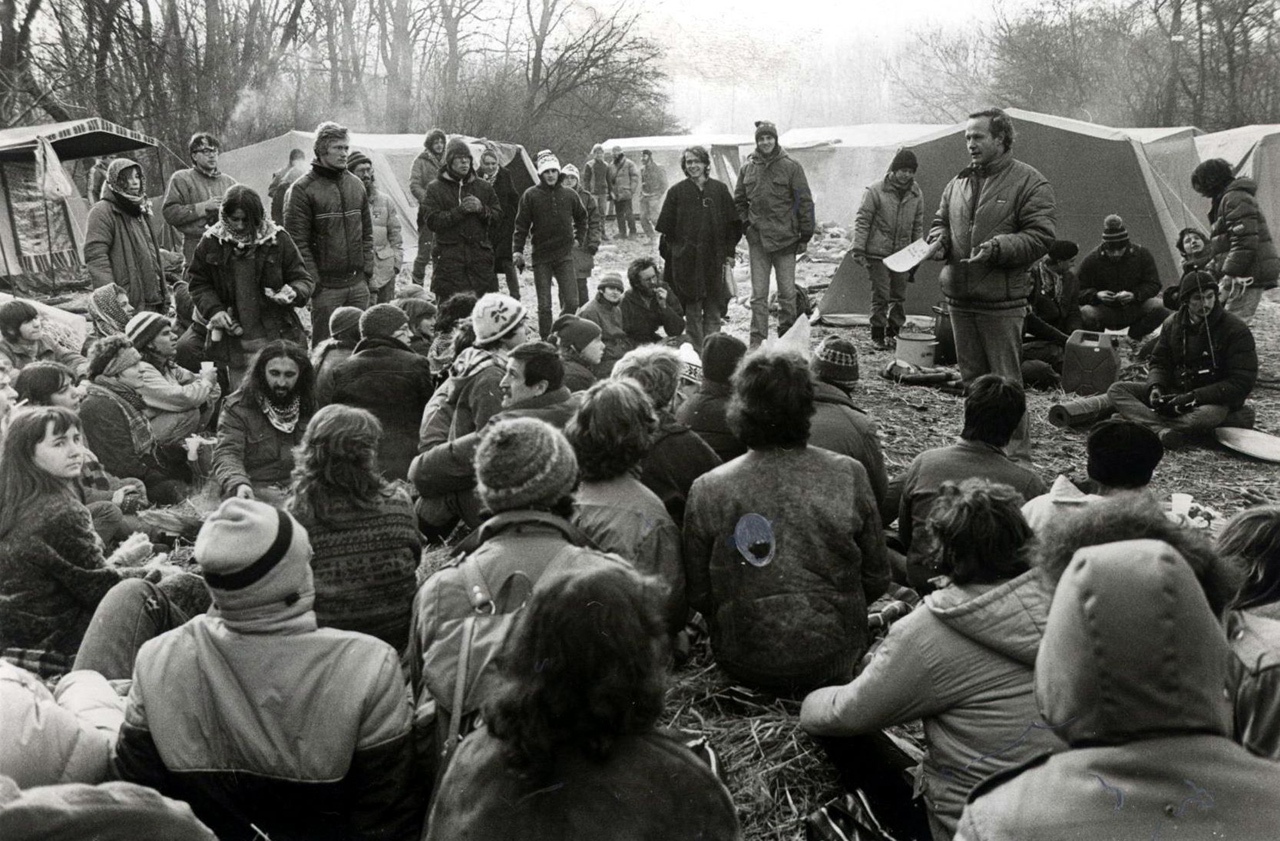 The protests also played an important role in the foundation of the modern Green Party, now a governing coalition party in Austria. Freda Meissner-Blau, a co-founder and first federal spokesperson of the formal parliamentary party, was a key figure in the protests which highlighted the appetite for an ecologically-minded party in this country.

„The birth of the environmental movement in Austria“

Meissner-Blau passed away in 2015 but her grandson Adam Pawloff, who is now a spokesperson at Greenpeace Austria, remembers how much these Au protests meant to her.

“I have these really vivid childhood memories of my grandmother talking about the protests in the Hainburger Au," Adam told me, "and I would say that those protests together with the protests that stopped Zwentendorf Nuclear Power Plant certainly were the birth of the environmental movement in Austria. They led to the formation of the Green Party but also led to the foundation of Global 2000 and Greenpeace Austria and all the big NGOs here.” 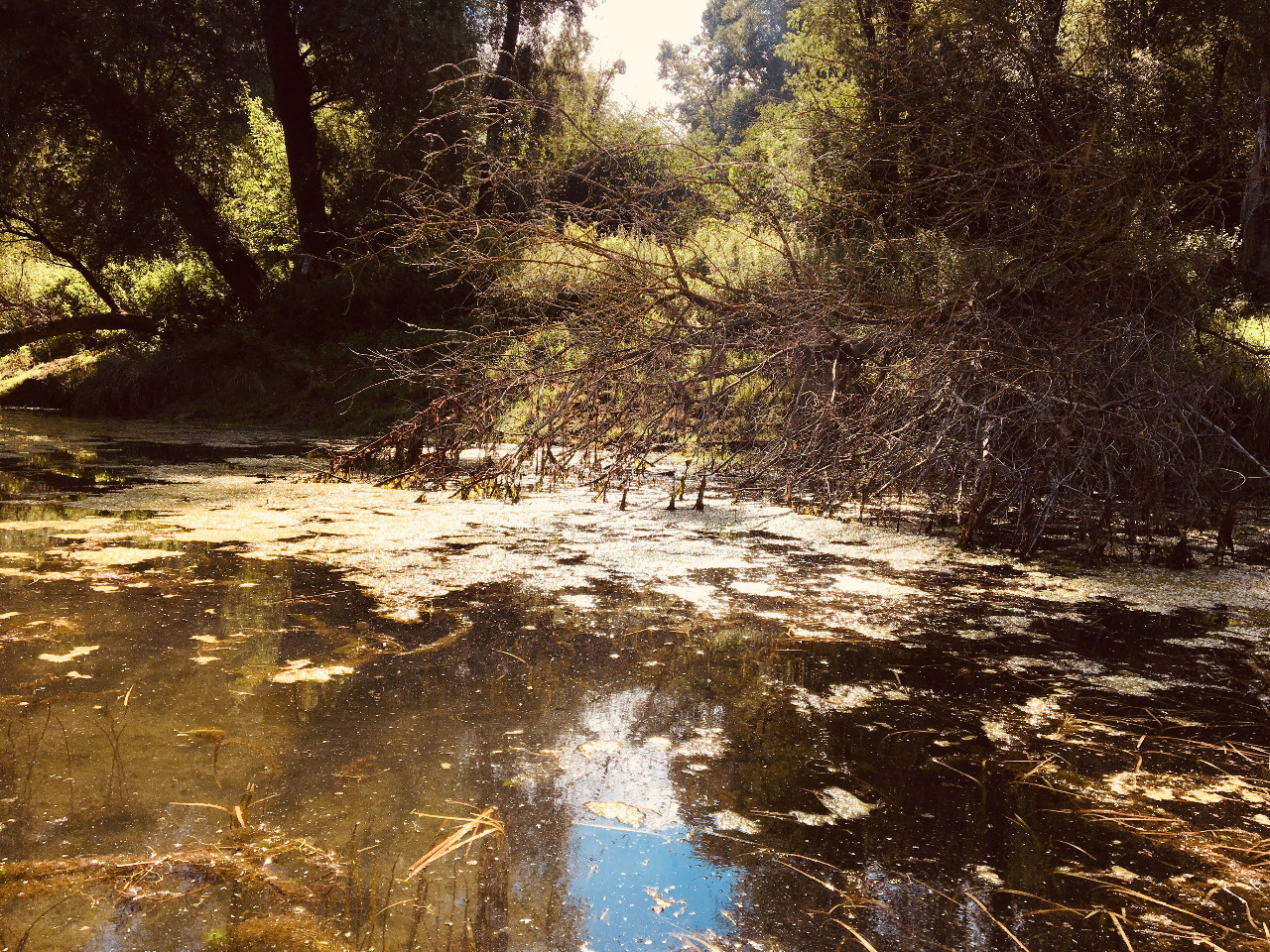 Enough of the history. Suffice to say that we should acknowledge that the glorious nature you can now enjoy between Vienna and Bratislava is still there because nearly 40 years ago Austrian civil society organized itself and said “no”.

It’s a spirit that lives on in the Fridays For Future movement, providing a kinship of spirit that could unite the generations. Wouldn’t it be nice if young environmentalists, instead of saying “OK, Boomer”, could think of those cold protesters who rescued the Au and thought “Thanks, Boomer”?

A Luxury Hotel for Birds

My mind was dwelling on that as we slinked under overhanging branches. But the rest of the passengers on the canoe were looking upwards to the sky where a heron was lazily flapping low overhead, seemingly flirting with the boat. There were brief glimpses of kingfishers, colourful bee-eaters and sand-pipers. Magnificent white-tailed eagles nest here; one of their key breeding spots in Europe. 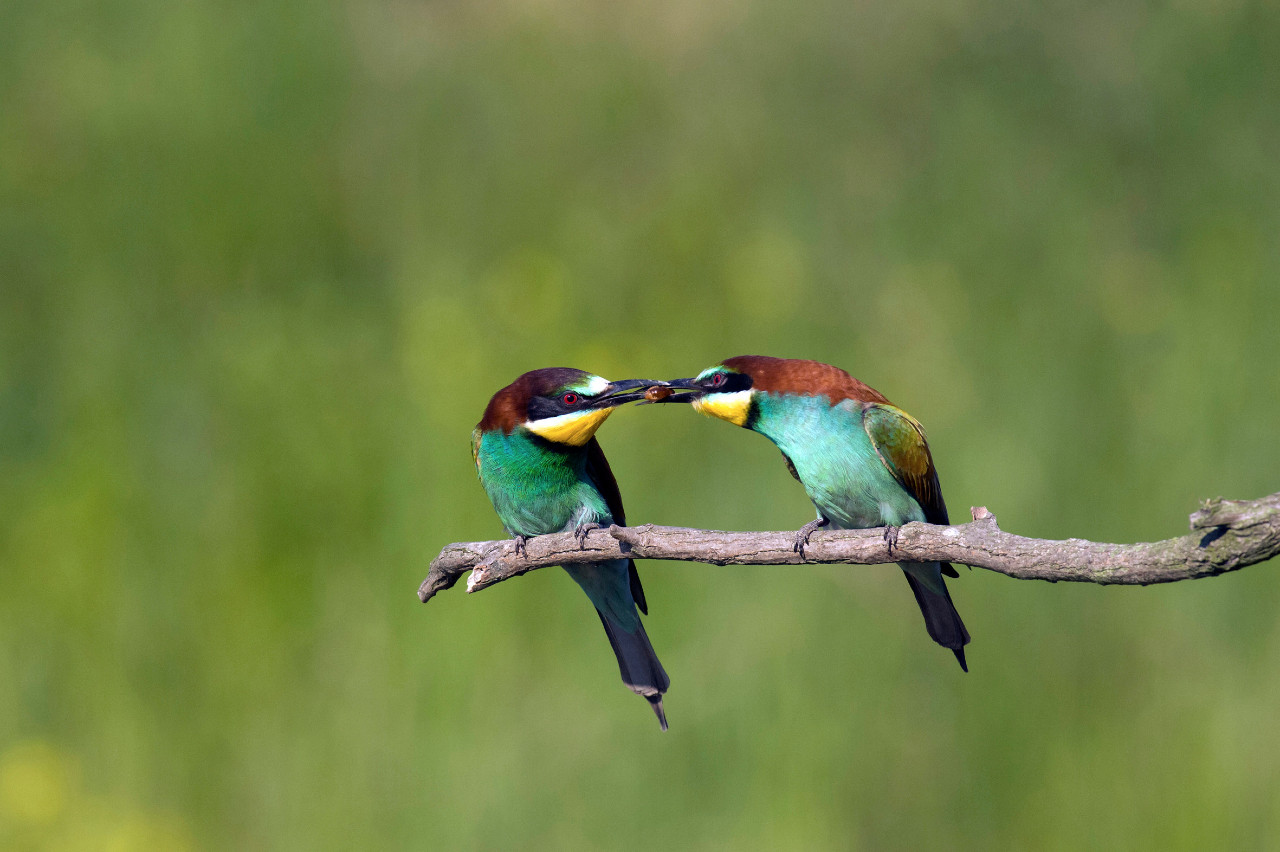 Why do the birds thrive here, I wondered? “Because, as you can see, this forest is very productive. It is very lush and very green,” explained biologist and ranger Heinrich Frötscher who was sitting beside me in the canoe. “The trees grow tall and wide and there are a lot of leaves to feeds on, which means there are a lot of insects to feed on.”

You could see the insects on the water, skittering across the almost still surface and, again, my eyes were drawn to the abundant water plants below. “As you can see,” continued Heinrich, “there is enough food for the birds; for the small birds and also for the large birds, for the birds of prey we have seen before. Also, huge trees are big enough to sustain the big nests for the birds of prey like the white-tailed eagle.” 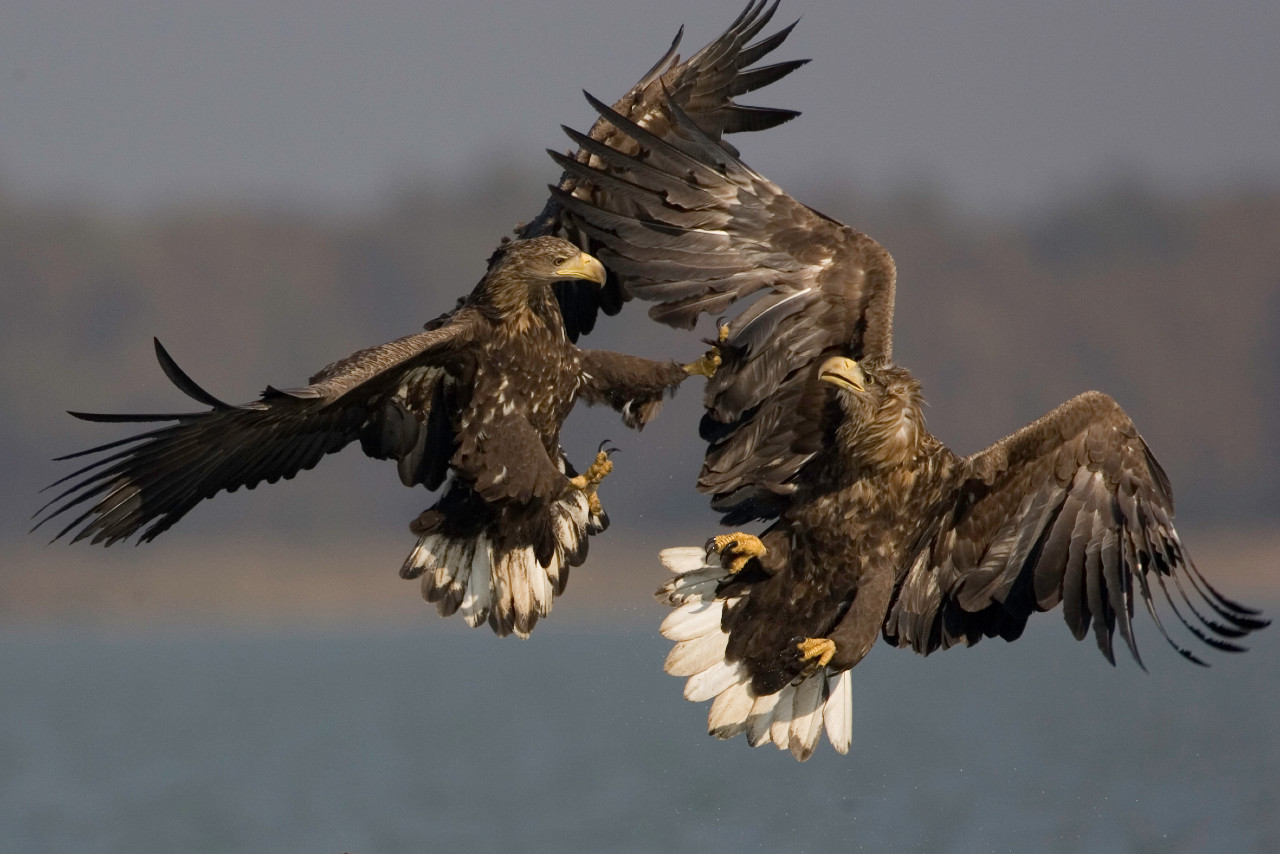 So, in essence the Donau-Auen National Park is like a comfortable hotel for all these birds with an all-you-can-eat buffet put on for them every day. And Heinrich, unlike most people I have ever met, had some words of appreciation for the much maligned mosquitos who make their presence felt here: “They are a very, very important part in the food chain or the food web of this forest. And because this forest is protected and it is a very natural forest it sustains a lot of small animals and so a lot of large animals and birds of prey can feed on it.”

Heroes in a Half-Shell

For birders, the white-tailed eagle is the big star of the Donau-Auen. One of the largest living birds of prey, with a wingspan of around two metres, it had been considered near to extinction in this part of the world mostly due to human destruction of its habitat. Therefore the protection of these wetlands has been vital for their return to Austria. But I have to admit I came for another reason; I wanted to see the pond turtles here, the only naturally-occurring turtle species in Austria; and for no better reason than that I find them extremely cute. 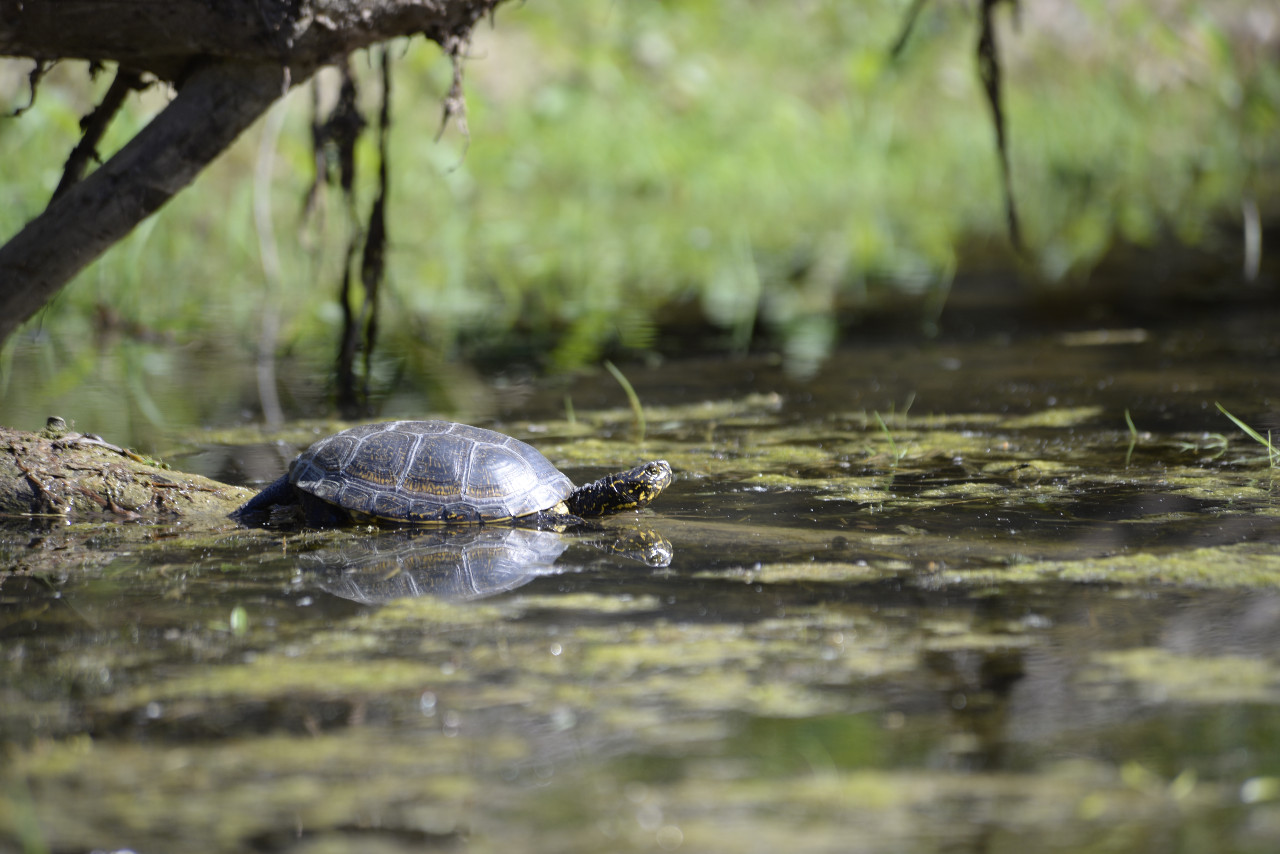 As we paddled down the water channel, we saw them perching on half-submerged fallen branches and sunbathing; exuding a spirit of calm and timelessness in this worrying and fast-paced world. They are exclusively carnivores, Heinrich explained, and their nearest cousins are found in North America. The pond turtle must have emigrated across the Barents Sea during the last ice age.

Although generally near threatened they are thriving in the national park. Since a protection scheme started in 2007, their numbers have risen from around 600 to perhaps 2000. The Donau-Auen National Park provides them with a richly structured underwater world of water plants and submerged wood which gives them nutrients, hiding places and hunting grounds. 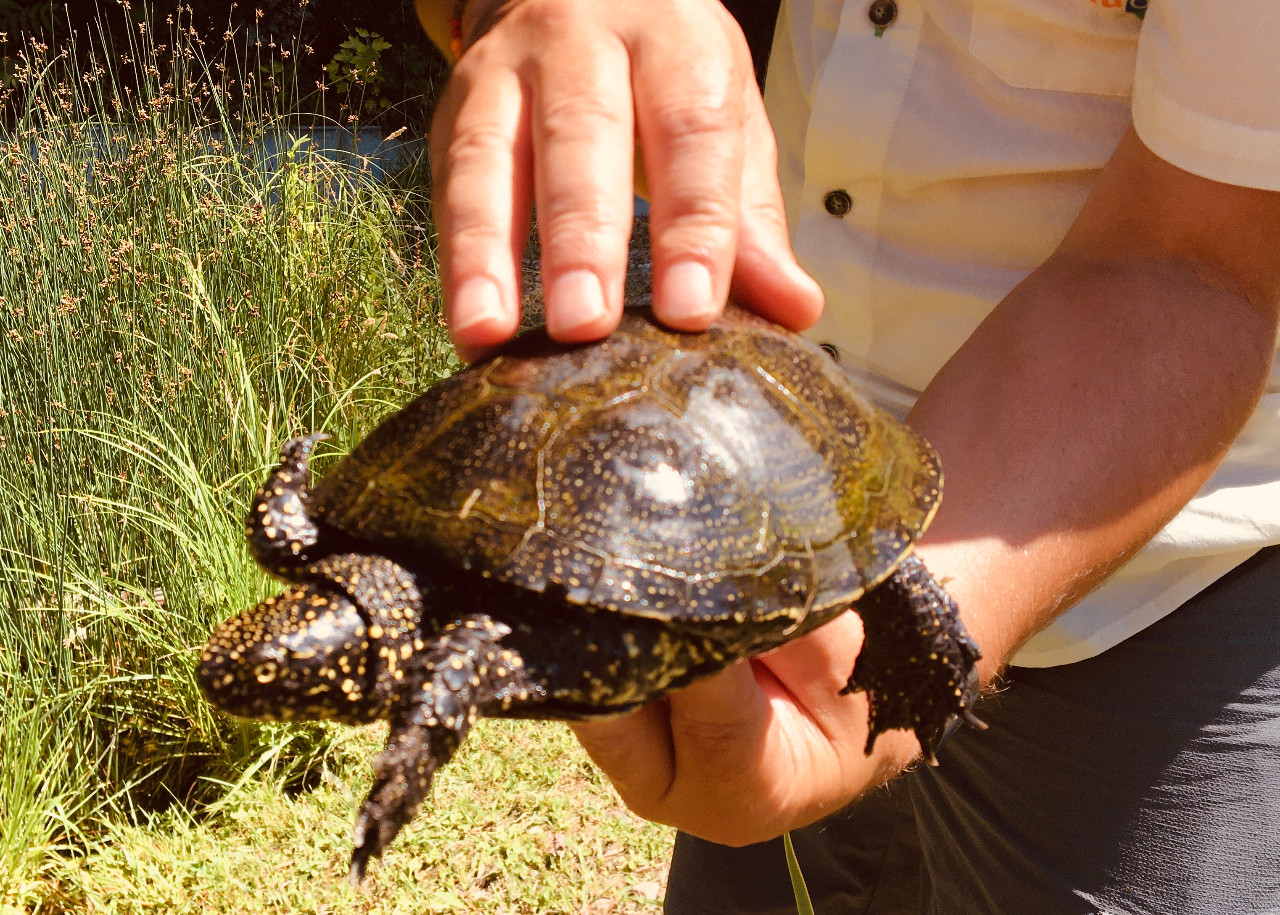 The rangers leave them to their own devises in the water but have to step in to support their breeding. The females lay their eggs at the height of summer and leave them to hatch in the autumn. They need quiet hidden places out of the reach of hungry foxes.

But the regulation of the Danube, as well as the onset of industrial agriculture, has destroyed many of their favourite dry spots in the alluvial forests of central Europe. Now the females lay their eggs on top of artificial flood banks where they are as inviting as a well laid breakfast buffet to the foxes. 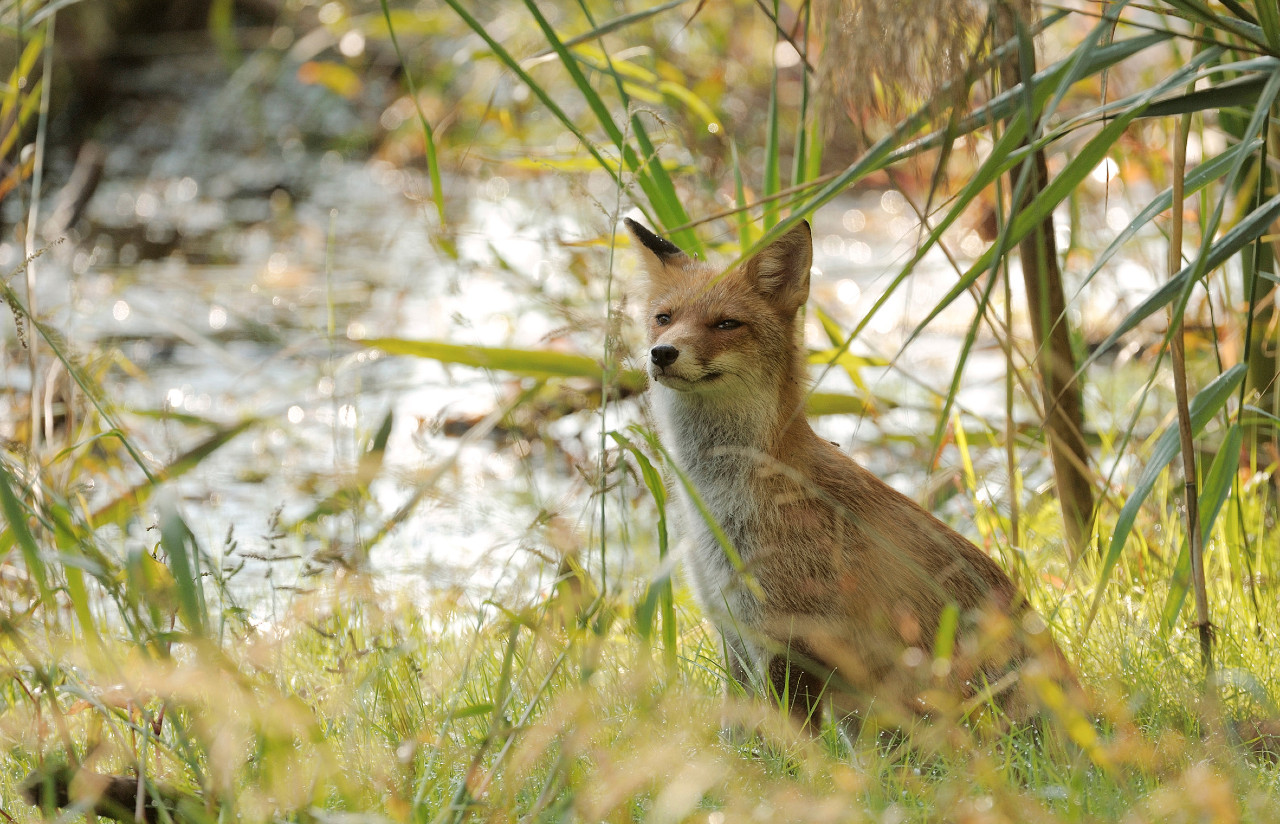 So, during the hot nights of early July, Heinrich and his team scour the area for clutches freshly laid eggs which they then protect with fox-proof wiring until the autumn hatching season begins.

These are long-nights for the rangers, full of mosquito-bites, summer electric storms and spooky night-time forest noises. But I watched Heinrich’s entranced face as a turtle slid down off its deadwood perch and splashed into the water and was left in no doubt that he felt it was all worth it. 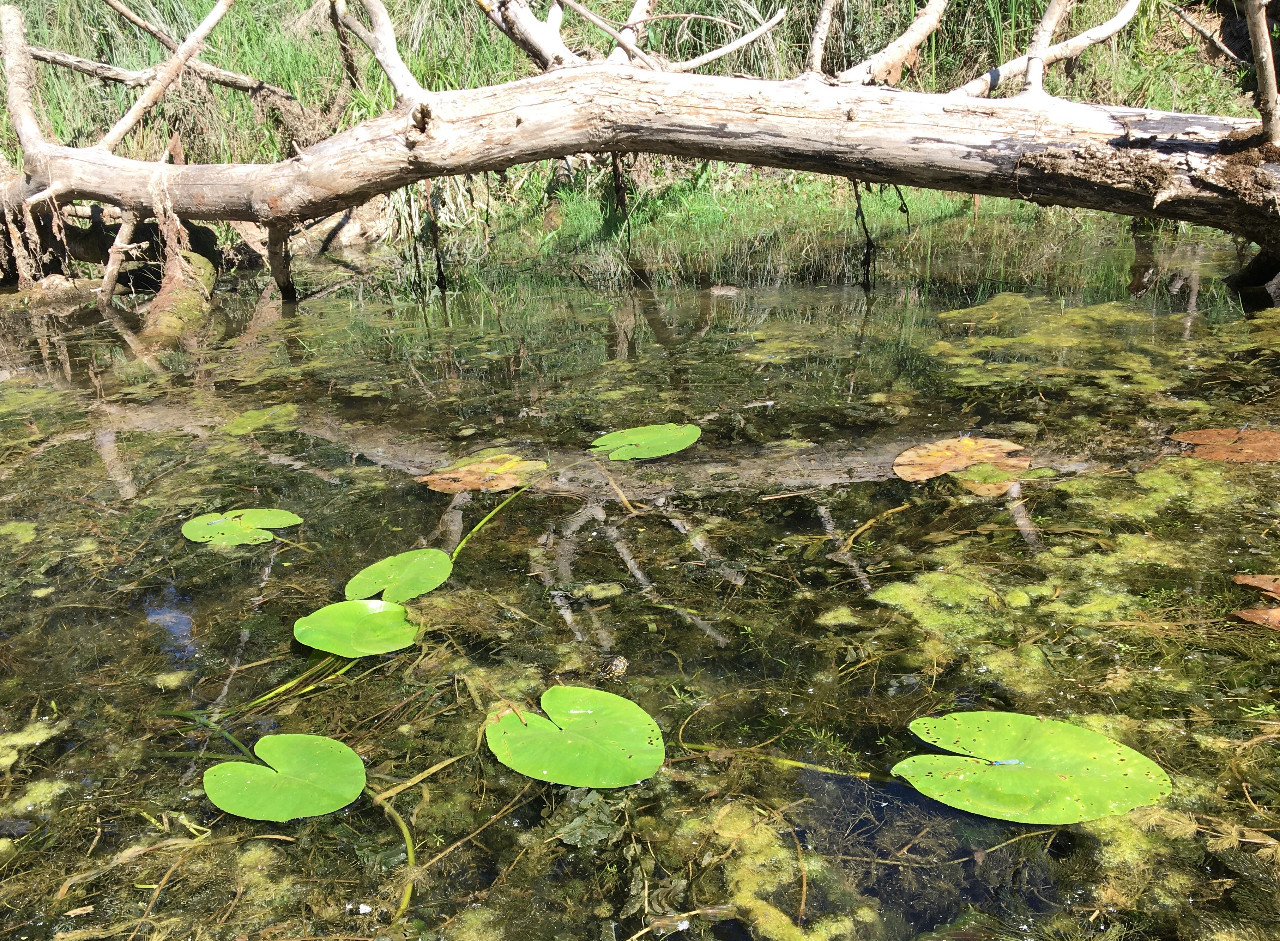 The deadwood looks spectacular in the summer light, a skeletal, spiky off-white sculpture that gives contrast to the dark and light greens that dominate the landscape. It also plays a vital biological role. In plantation or managed forests, trees are removed when they die. But even while still standing, these dead trees provide a vital habitat for all sorts of bird species, including woodpeckers, as well as hundreds of insect species.

When the trees eventually fall into water, their submerged architecture provides a city-like infrastructure for the needs of turtles, fish and water bugs as well as seeping nutrients into the water. Without this death there would be no life. 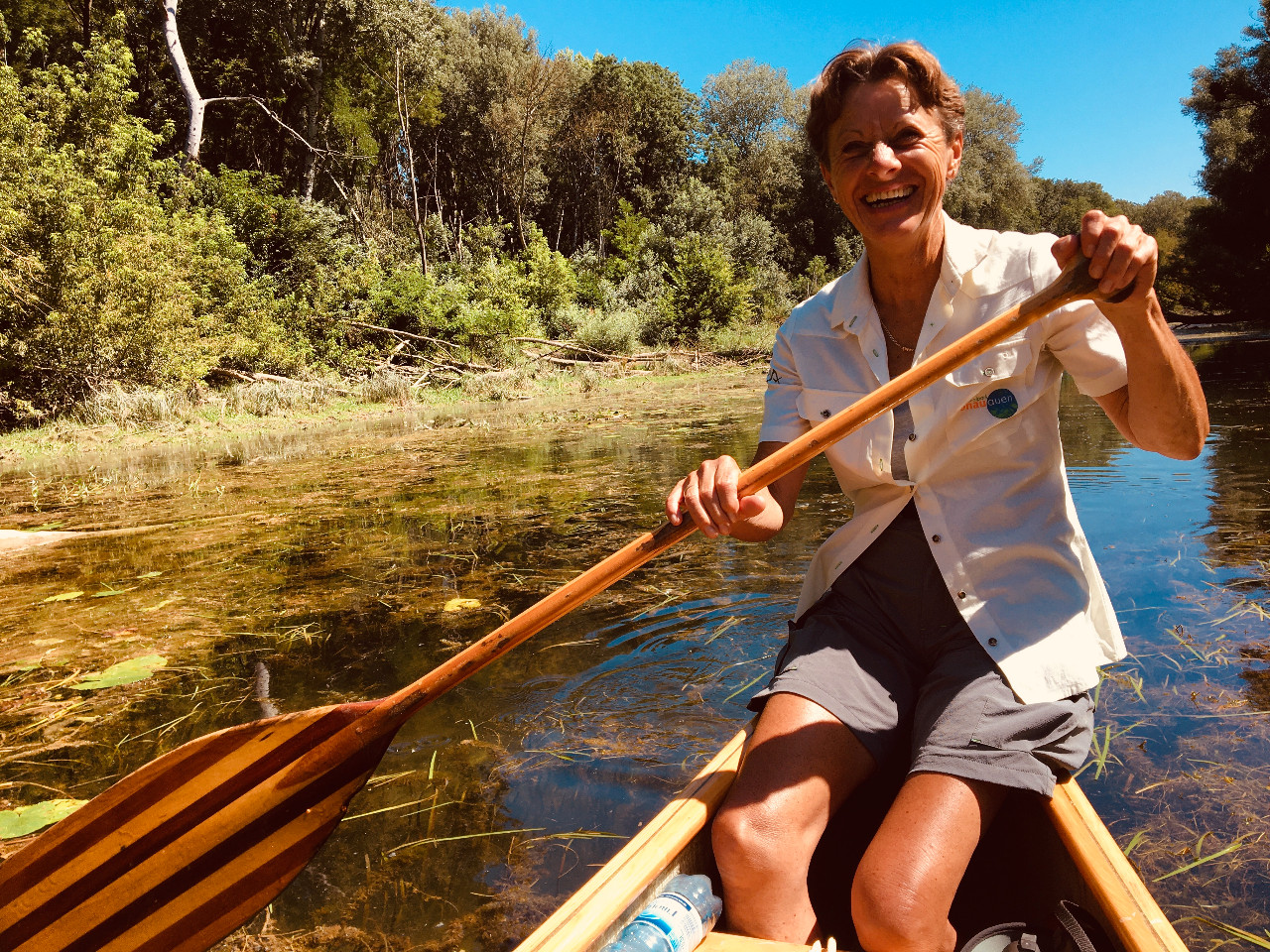 Our canoe, on this hot summer day, was being expertly steered by Rosemarie Grimm, a deeply tanned ranger who has worked at the national park since its foundation in 1996. She also played her small part of the protest movement that paved the way for the park’s protection and says she can’t bear to imagine what it would have meant if this paradise had been lost.

„It would have been a catastrophe!“, she said.

Rosemarie spends most days in the warm season showing guests around on her canoe and she says she never gets bored of it.

„There is no season I don’t like or weather that I don’t like,“ she told me. "On hot days like this the water is so clear. On foggy days everything seems so mysterious.” 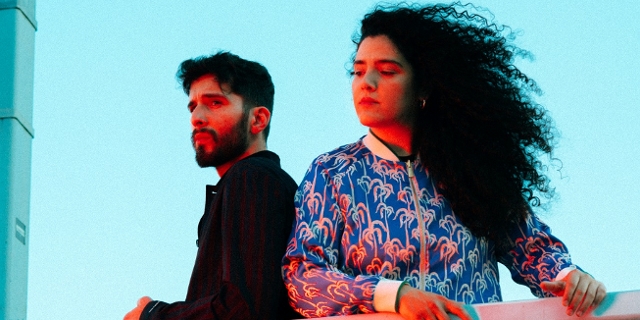 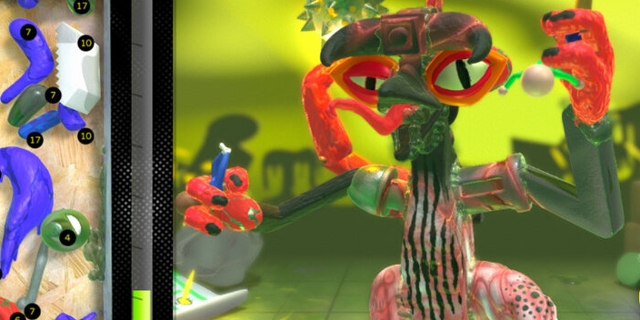 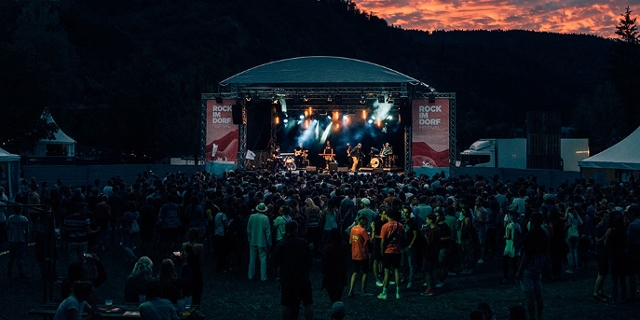 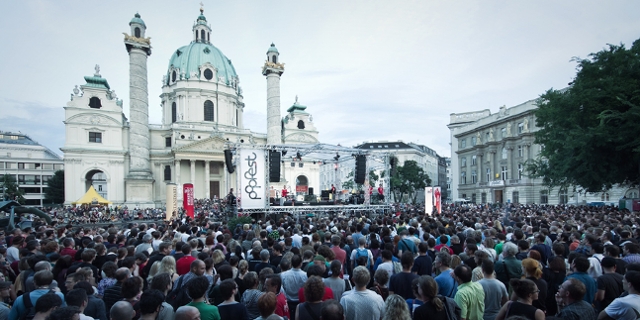