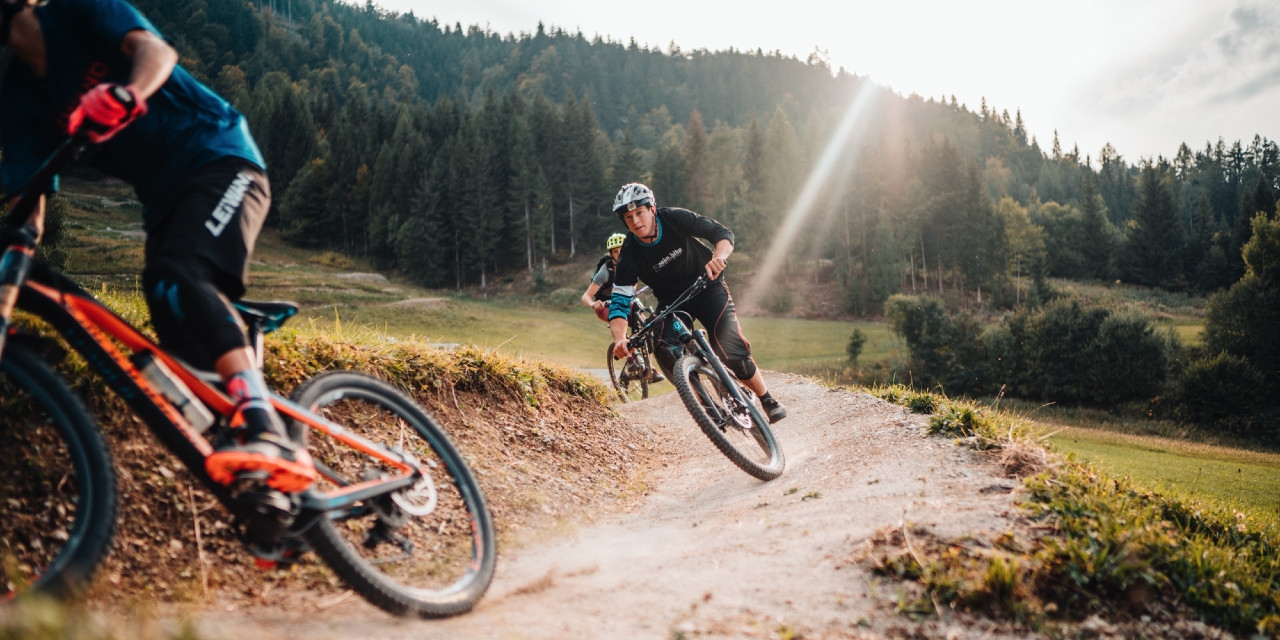 Plunging Into The Lake

The track stretched out seemingly unendingly. One banked curve followed another on a helter-skelter descent that snaked down a flower-strewn meadow on this southern Austrian Alp. Down below, over the roof of the Baumgartnerhof hotel, I could see the U-shaped Faakersee glistening an inviting deep blue at the bottom of the mountain.

In the sharp evening light, everything was so intoxicatingly beautiful that I heard myself whoop involuntarily with delight like a drunken cowboy. 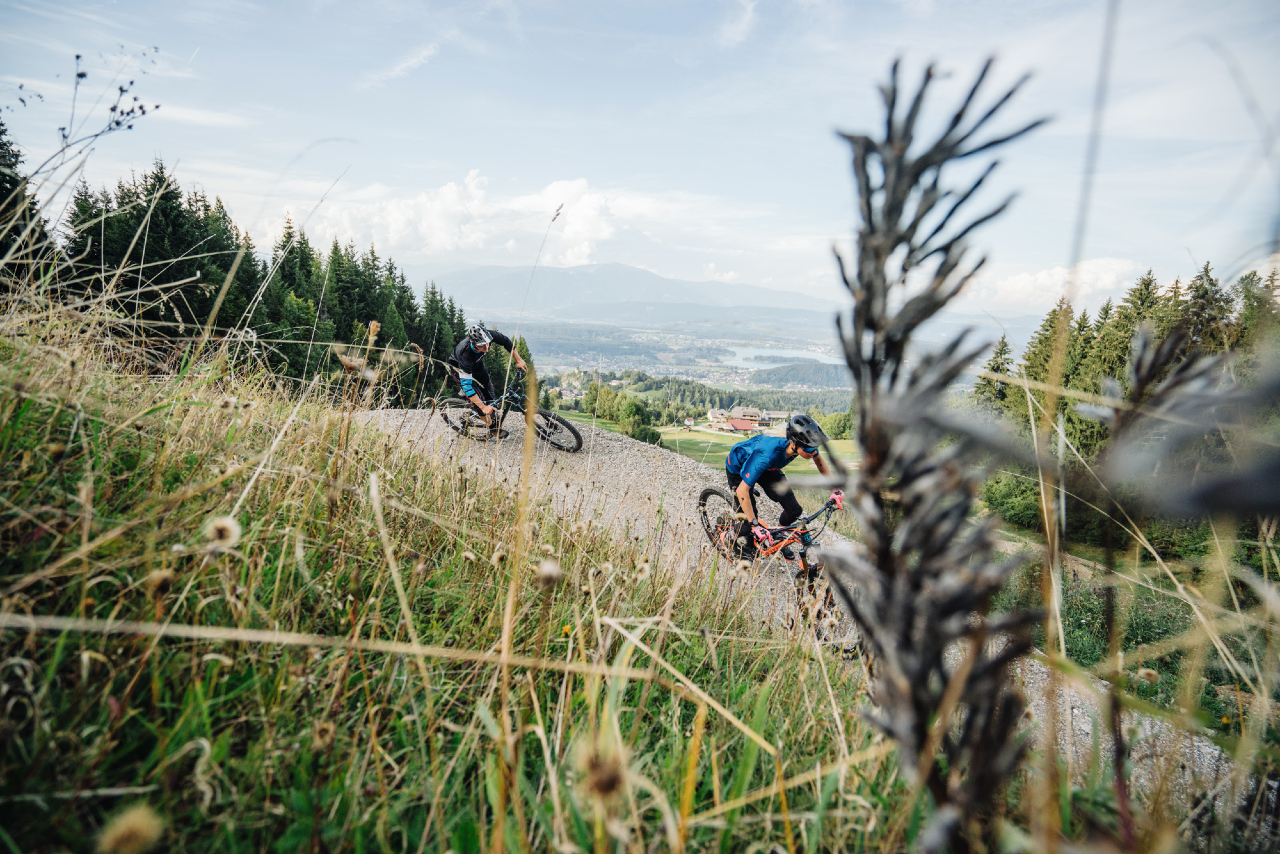 This root-free flow-trail, the Flowgartner Trail had been carefully built to minimize risk and maximize fun; the track running at times almost perpendicular to the slope and provided a natural brake to speed. Big rolling humps, like on the back of a camel, had been shaped in to the trail proving a roller-coaster ride.

It should have been easy, but, because I am unused to such luxury, I was glad that technical trainer and guide Christoph Schaunig of Alpbrothers was riding just ahead of me. He was showing me the ideal line and a controlled pace and we bucked and hopped over bumps which seemed to be trying to through me dangerously forwards:

“The most important thing to do when you go over these bumps is to not just roll over passively,“ Christoph had warned me. „You have to anticipate the terrain and play with it, otherwise the back wheel might be thrust too far forward and that can end nastily.” 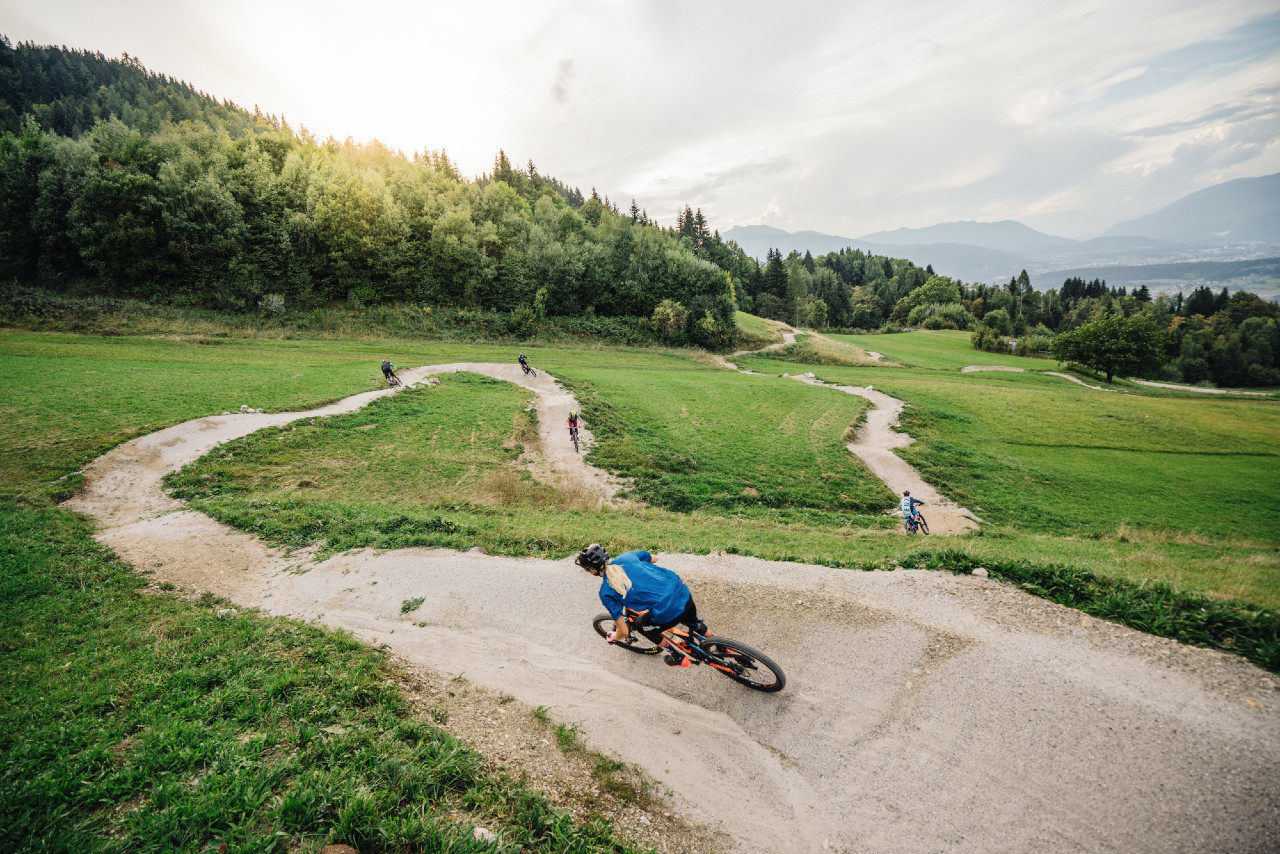 I felt in good hands. I’d contacted Christoph as soon as I knew I’d be in the area; explaining that I loved mountainbiking, that I was pretty fit but that I was a bit of a coward. He invited me for an after-work ride with a few of his friends and told me he had just the right tour for me.

Southern Carinthia, where Austrian rubs up against Slovenia and Italy, is developing into a bit of a mecca for mountainbikers and that is largely thanks to the lake.bike concept developed by Andi Holzer, a wide-smiling local who had joined us on this evening ride.

“With lake.bike we wanted to create a concept from within the mountainbike community,” he told me as we huffed and puffed up a gravel incline. “It was mountainbikers creating a network of trails for other mountainbikers and making them accessible and then looking after them; keeping them in a good condition.” 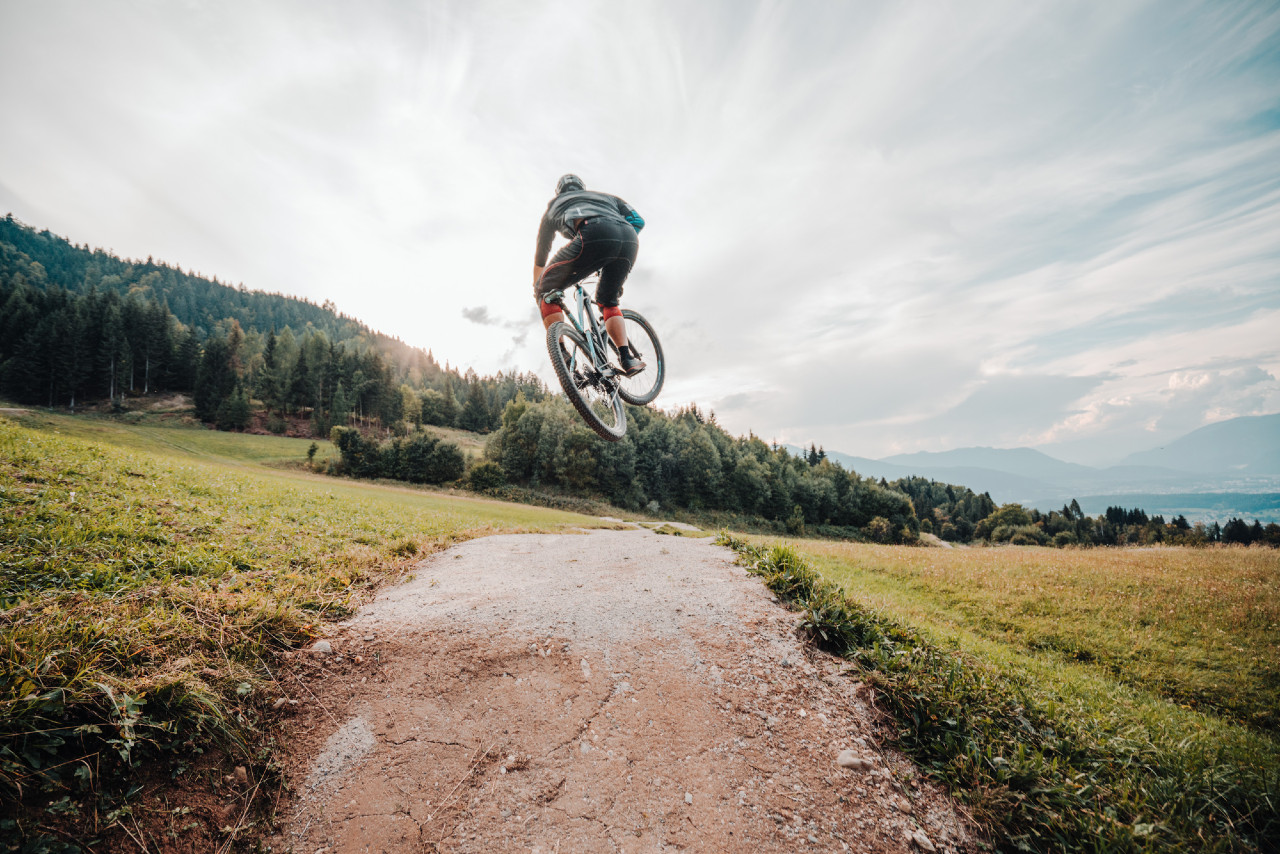 The first thing that struck me on this ride was the sense of adventure. A few minutes into the ride we had plunged down a rock stretch of single-trail, the Ischnig trail, and had to splash our way over a mountain-stream, balancing on the cement blocks that marked the top of a waterfall, with the water rushing through the gaps between our wheel spokes.

I’d spent the lock-down period endlessly pedaling the same short route around my local stretch of Wienerwald; suddenly I felt I was on some sort epic odyssey exploring an unfamiliar landscape.

Past the Ischnig hut, where Alpine cows lolled under watchful gaze of the sun-kissed and rounded crags of the Mittagskogel the path led us ever upwards, into the “Valley Of The Outlaws” and past a trail that would lead over the mountain to Kranjska Gora in Slovenia but is sadly currently closed because of a landslide. 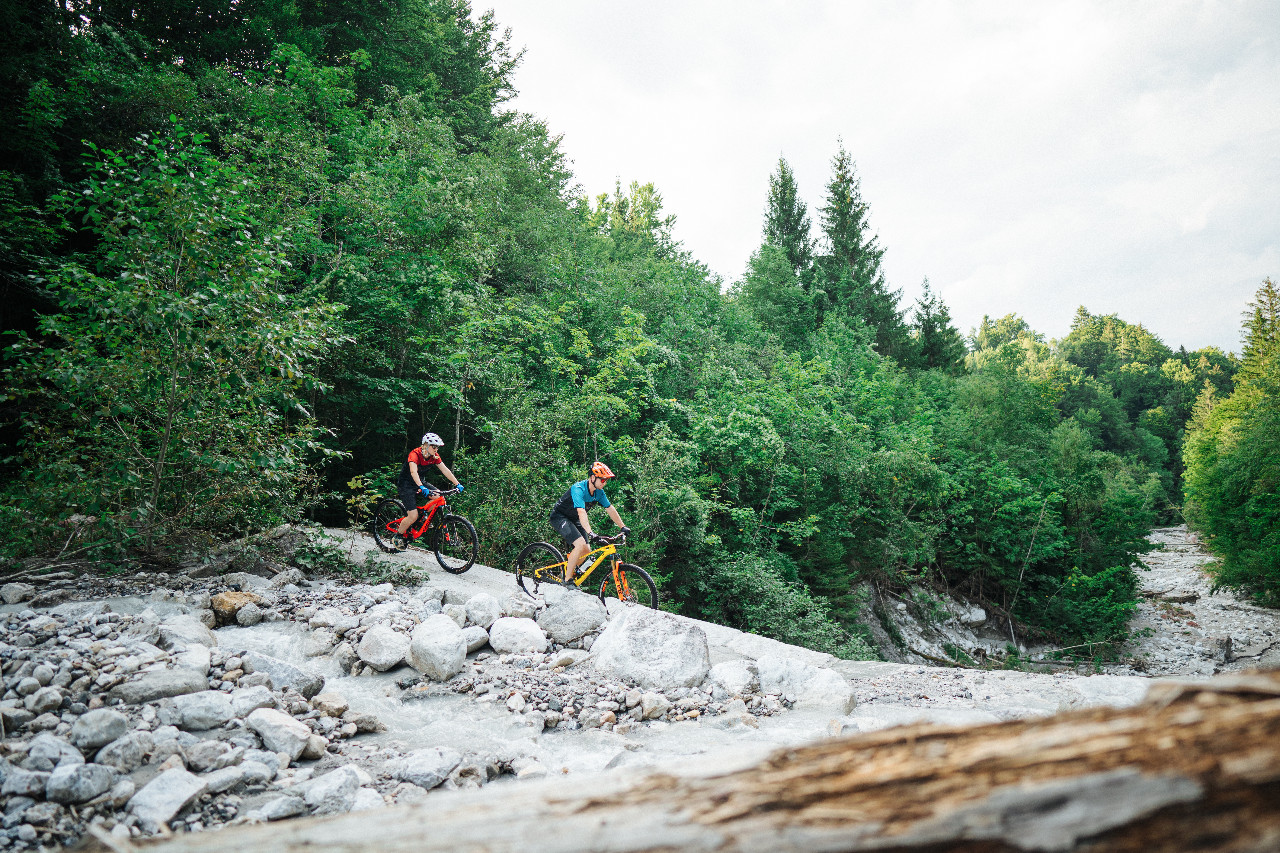 Having grown up on an island, I can never hear or read of a land-border without wanting to cross it. A mountain frontier, with its romantic aura of smuggling and secrecy, is even more appealing. The sign warned of bears, which, though apparently extremely rare, added to the lure of the wild. How I longed to head up that track!

“As well as the mountains and lakes, I think it is this proximity to Slovenia and Italy that makes this region special,“ agreed Alpbrothers’ guide Christoph, who is known to head off with friends to Italy on his roadbike just to get a good espresso coffee.

But it was a purely domestic Austrian adventure on the menu for us this summer evening, appropriately enough for this stay-at-home 2020. After our pleasure-glide down the Flowgartner we plunged back into the forest for more challenging trails; well-marked with entry points along gravel-tracks or small mountain-roads. Some trails were exclusively reserved for bikers, others were “shared trails” where riders are reminded to give hikers priority of way.

On one corner, we passed a farmhouse where tools and oil and been laid out for the free use of passing bikers. After reading so much about conflict between bikers, hikers and landowners – and finding Wienerwald trails deliberately blocked with dangerous branches - it such a refreshing sign of harmony.

“It wasn’t always this way,” admitted Andi. “When most of the trails were illegal then there was conflict here as much as anywhere.” But in recent years, the tourist authorities for whom Andi works, have got together with local landowners to explain the benefits to the region provided by a healthy mountain-bike scene. 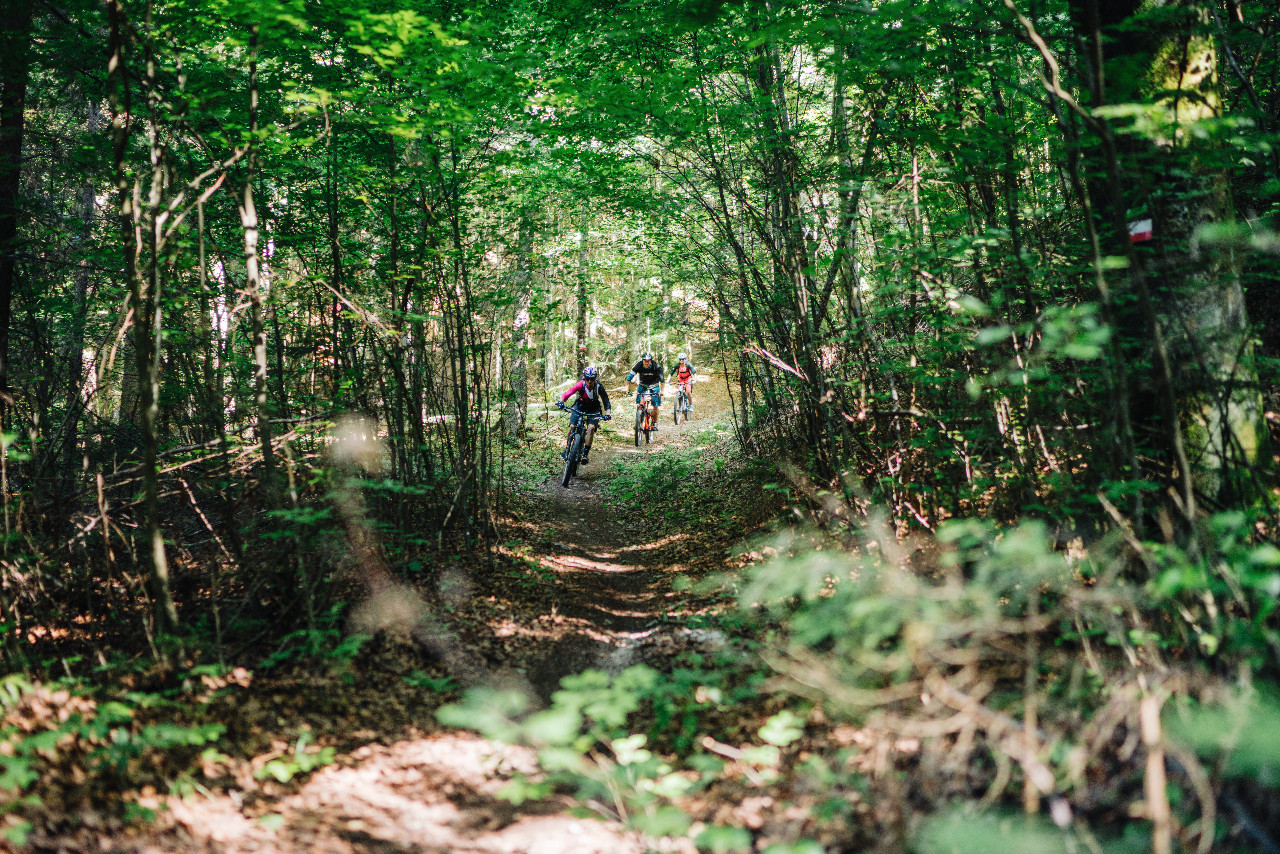 Consensus has been built and many more legal trails have been opened, giving bikers a legitimate place to enjoy their passion and delivering hungry and tired riders to hotels and restaurants. The black and white lake.bike banner flies outside many local businesses and the Baumgartnerhof in particular was teeming with bikers, wolfing down dumplings and toasting their rides with an evening beer.

Not surprisingly, Andi Holzer is convinced that mountainbiking, and cycling in general, is becoming one of the most important branches of Austrian tourism. Snow is becoming more unreliable and cycling in all its forms is booming. “We see how many people ride bikes in cities nowadays and it is the logical next step to want to take their bikes on holiday with them too,” he told me. “And the politicians want to see it; more people pedaling instead of driving their cars. Cycling is the future; the future of tourism too: after all it is healthy.”

By this point, my guide Christoph seemed to have forgotten my cowardice, or at least have realized that I was prepared to swallow my fear for the sake of an adventure and a good view.

After negotiating an up-hill track - the “Hill Climber” – that was so steep that we all had to get off and push, we found ourselves riding a narrow trail, the Samonigg Trail, that runs along the ridge of a mountain and past a radio transmitter. 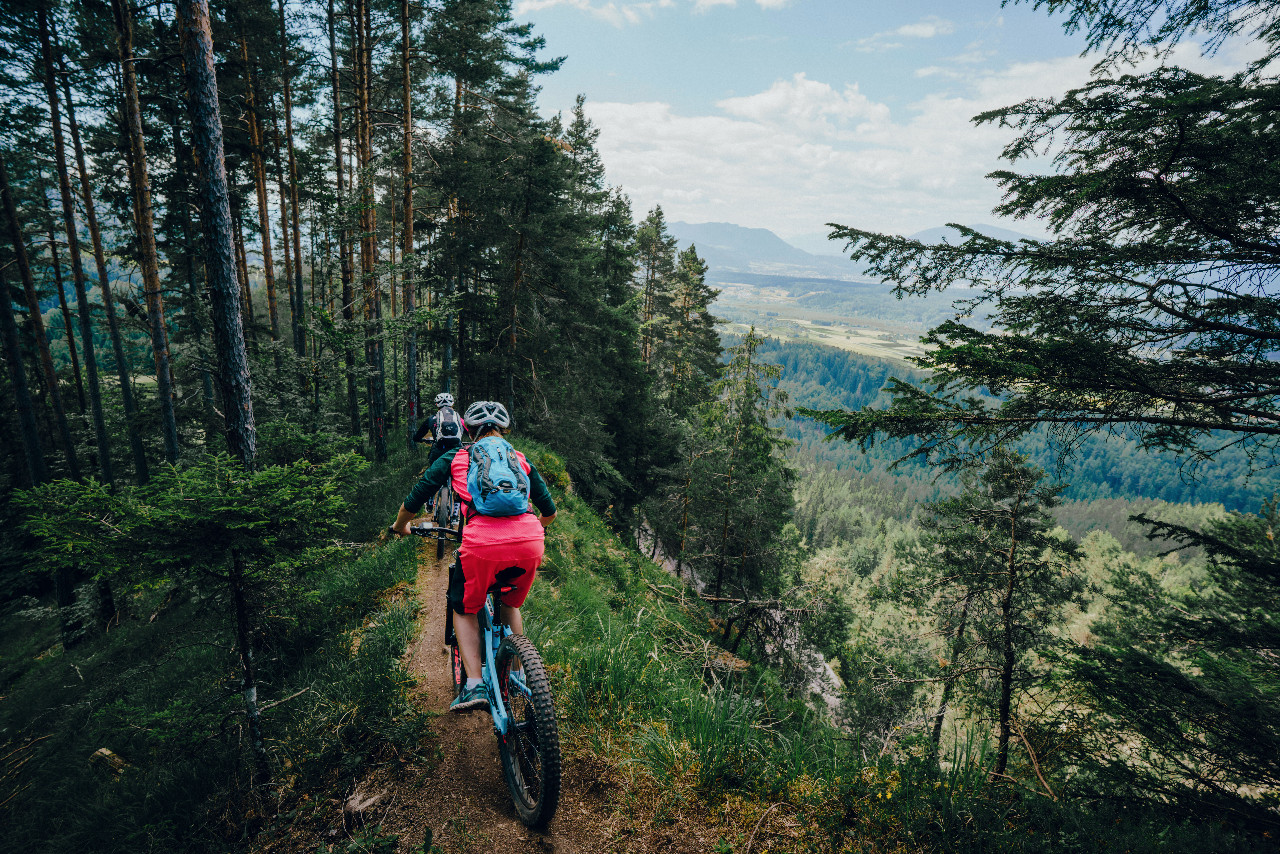 The ground fellow away steeply on both sides and the golden evening sun made the ferns that hang over the path glow in emerald-light, giving the ride and otherworldly atmosphere. It felt like a dreamscape. Christoph veered to the right to another lookout, peering over the landscape of lakes and gentle alm meadows.

The angle of the sun was a reminder that we had to get back down to the valley. From the lookout, it was an exhilarating descent through the forest, which was dark, moist and mysterious with the approach of dusk.

As the terrain got steeper I shifted my weight right back over the back wheel and tried to keep sight of Christoph as the path twisted and turned over roots and stones and the debris of summer flash storms. For a while my heart was in my mouth but then the crepuscular woods spat us out in the sun-bathed flat valley and a sense of safety and warmth. 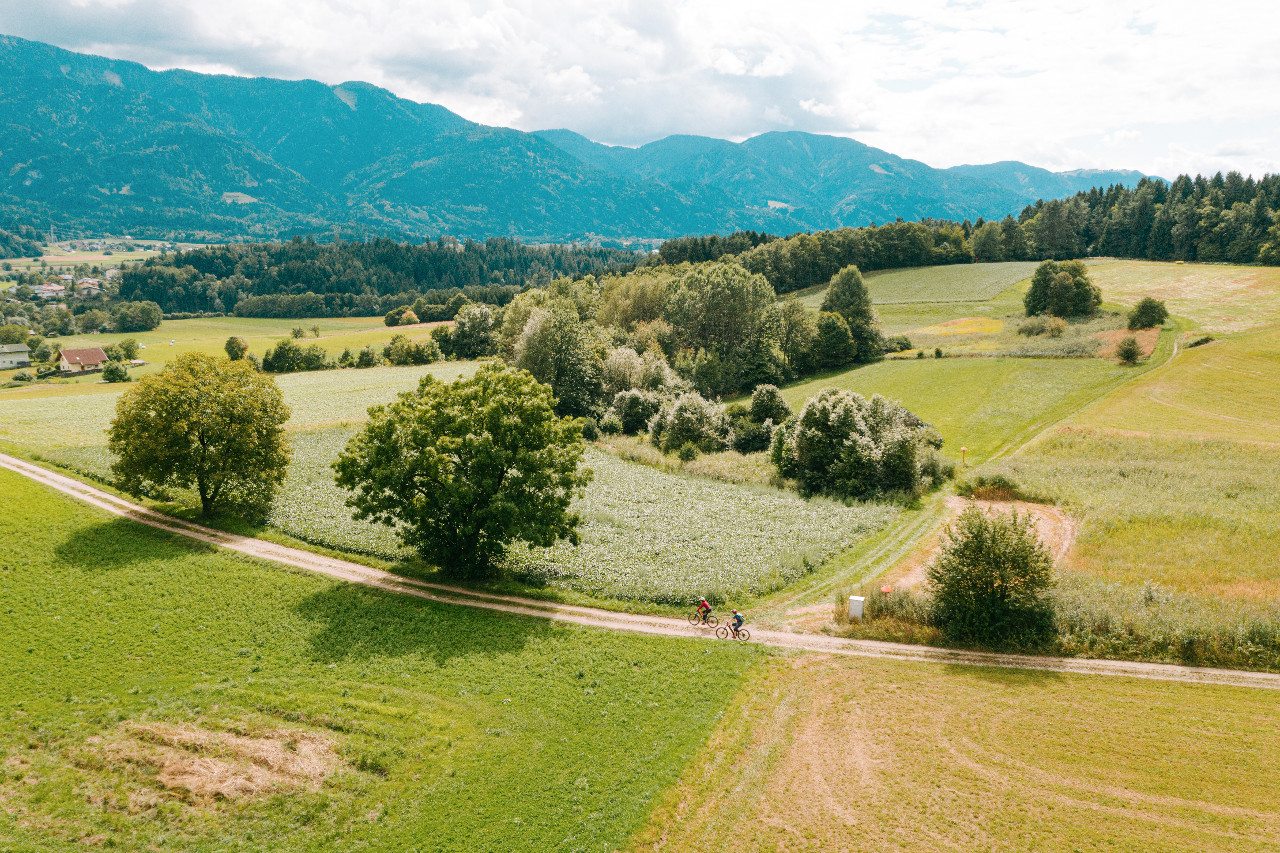 I’d asked Andi earlier for his idea of a perfect day of biking. He’d mentioned the trail and packing in enough altitude to get a good view but insisted that a ride should end in a way that is traditional in this part of Austria – a refreshing plunge into a lake. So, I pointed my bike to the shore-line where my family was bathing. As I approached the beach, threw down my bike, gloves and helmet, shoes and started sprinting into the shallow water, diving forward as the water became thigh-deep and embracing the rush of delicious cool. As I emerged, dripping but elated, I turned back to the shore and looked with pride back over the trees up to the mountain slopes beyond, where I’d just enjoyed my biggest adventure of the summer so far. 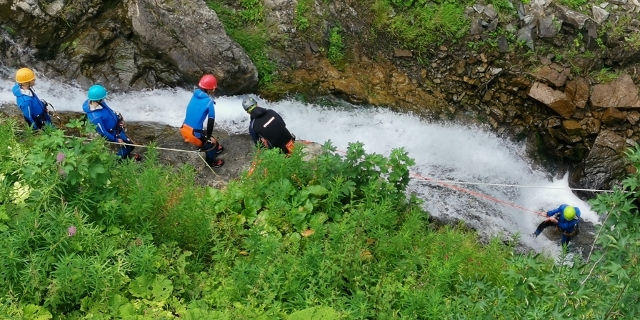 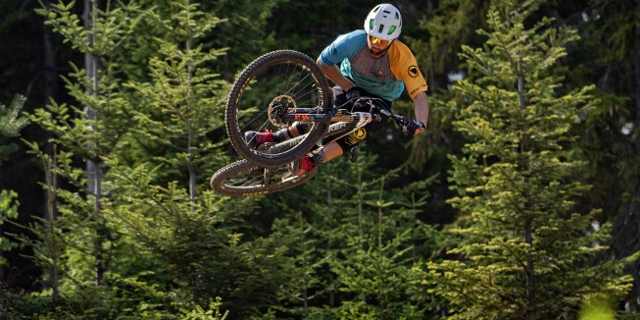 Wexl Trails: Back to school in St. Corona 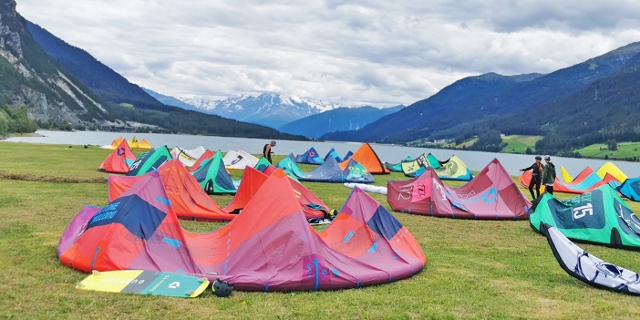 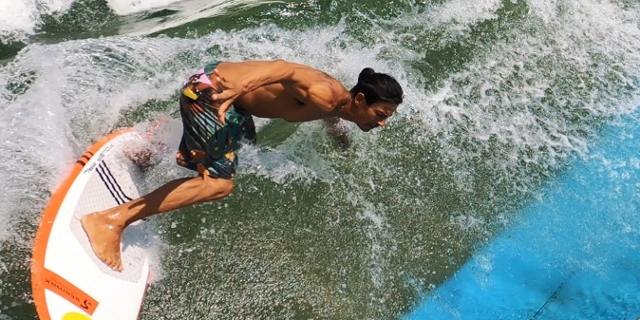 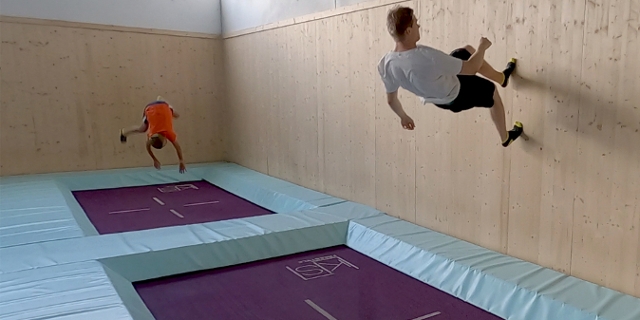 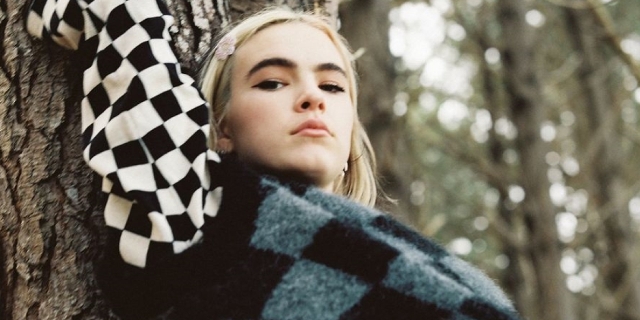 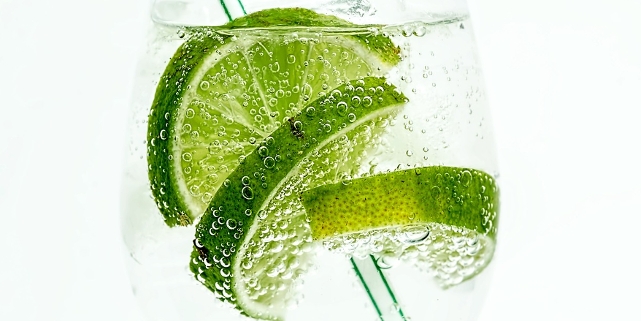 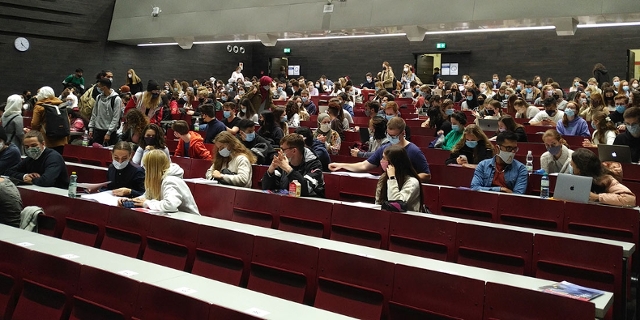 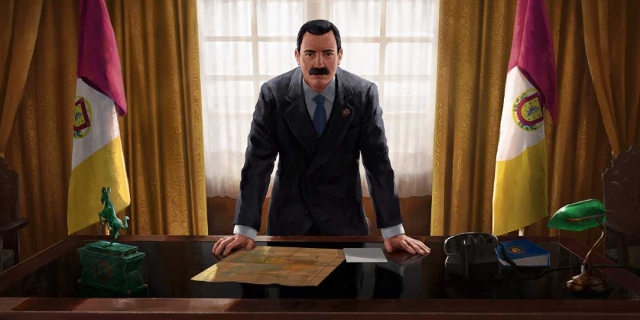